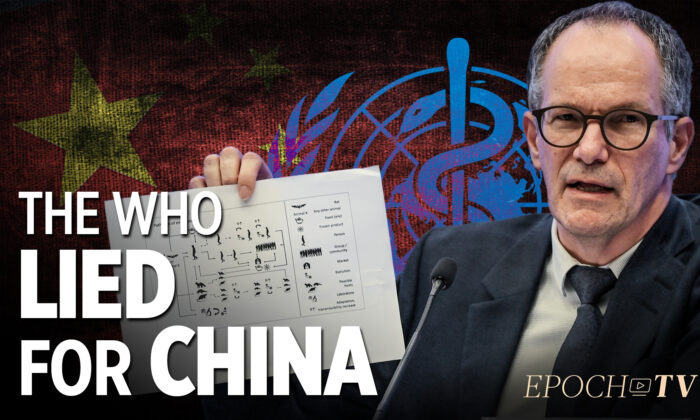 Did China Pressure World Health Organization investigators to dismiss the possibility of a Wuhan lab leak in their initial report? Join Jeff Carlson and Hans Mahncke in the latest episode of “Truth Over News” for all the crucial details surrounding the efforts to investigate the origins of the pandemic, and the cover up that followed.

The WHO in its March 2020 report into the origins of the pandemic told the world that a lab leak at the Wuhan Institute of Virology (WIV) was extremely unlikely. The WHO’s lead investigator, Peter Embarek, said there should be no further investigation into the lab leak theory, stating that a lab leak could not explain the introduction of the virus to the rest of the human population. He claimed that his investigative team had taken a rational and objective approach to reaching such a conclusion. Embarek also said that Chinese authorities had been highly cooperative and had never pressured him to remove anything from his report.

This turned out to be a lie, and Embarek’s own words prove it.

In January this year, the WHO sent its investigative team to Wuhan to track and determine the origins of COVID-19. In a press conference in February, Embarek repeated that a lab leak was an extremely unlikely source of the pandemic. Those claims were repeated again that day by Peter Daszak, the man who was funneling United States taxpayer money into the WIV. Those funds were provided to Daszak by the National Institute of Allergy and Infectious Diseases (NIAID), Dr. Anthony Fauci’s organization.

Both Embarek and Daszak’s claims received almost immediate pushback from an unexpected source—WHO Director Tedros Adhanom. On Feb. 12, Tedros stated that all hypotheses for how the virus first spread, including a lab leak, remained on the table. Two days later, his pushback was echoed by another member of the WHO’s investigative team, John Watson, who had accompanied Embarek to Wuhan. Watson told the BBC in an interview that “it’s clear the possibility that this escape from one of the big Wuhan research institutes and laboratories is not ruled out.”

Watson also said there had been restrictions on what the WHO team were able to view in Wuhan, and that they had not been given access to all the requested information by China. But unfortunately, Embarek had already claimed in March 2020, while presenting the WHO team’s findings, that the “material and results and analysis and data in the report speaks for itself in terms of how the collaboration went. There would never be anything like that if we did not have a very strong and good collaboration with our colleagues in China.” He also stated that his team was “never pressured to remove critical elements in our report.”

All these claims later turned out to be blatant lies. And Embarek’s narrative was already established and the world followed suit.

What the corporate media failed to report was the criticism that these statements received from WHO leader Tedros, who stated that even he did not believe the team’s findings were robust enough. On the same day that Embarek presented his findings to the WHO, the United States, along with 13 other countries, put out a formal call to conduct their own independent investigation and stated that “we join in expressing shared concerns regarding the recent WHO-convened study.”

The events that followed morphed the lab leak theory from a disregarded “conspiracy theory” to the most likely explanation for the COVID-19 outbreak. On May 2, former New York Times scientist Nicholas Wade published an article laying out the case for the lab leak theory. He wrote, “A defining mark of good scientists is they go to great pains to distinguish between what they know and what they don’t know. By this criterion, the signatories of the Lancet letter were behaving as poor scientists: they were assuring the public of facts they could not know for sure were true.”

His standing and credentials in the liberal corporate media were exactly what was needed to bring clout back to the investigation over lab leak theory.

On May 14, 18 scientists—including the so-called father of gain-of-function research, Ralph Baric—wrote an open letter calling for an open and thorough investigation into the origins of COVID-19, free from conflicts of interest. “We must hypothesize about both natural and laboratory spillovers seriously until we have sufficient data.” A week later, a co-signatory of a widely cited 2020 letter claiming the virus had natural origins, Ian Lipkin, came out to say that he had changed his view and now thought the virus could have come out of a Wuhan Lab. Lipkin said the lab leak should have been prevented, citing the dangerous experiments that were being done in Wuhan’s level 1 and 2 labs with lower biosecurity safeguards.

Interestingly, in Embarek’s presentation, he had mentioned a level 4 lab, however, the Chinese authorities had already at that point conceded that both the Wuhan Institute of Virology and the Wuhan Centers for Disease Control were using level 2 labs to conduct bat virus experiments. It was also belatedly reported that three scientists at those virology labs had been hospitalized with symptoms consistent with COVID-19. This was before the first case was even reported.

On May 26, the Biden administration sent out a statement that they had expanded their investigation into the origins of COVID-19. Embarek took note of the changing tides in the narrative and put forth a video about COVID-19, in which he made startling statements that hardly received any attention from the mainstream media. Embarek admitted that the lab leak was not only possible but probable, and what’s worse, he said that the Chinese scientists and officials had withheld information and pressured him, along with his team, to drop the lab leak theory all together during their investigation. Embarek, who was working closely with a Danish documentary team at the time, said that the lab leak theory was probable, and suggested that a Chinese researcher could have been infected by a bat while taking samples in connection with the research at a Wuhan lab.

These statements directly contradicted earlier statements made by Embarek in the WHO-China joint press conference. Embarek also told the Danish team that a deal had been struck between the WHO investigative team and their Chinese counterparts that the lab leak theory could be mentioned in the report, but only on the condition that the report did not recommend any studies to further that hypothesis. This came after two days of negotiating due to the Chinese not wanting the lab leak theory mentioned at all.

Embarek told the Danish crew that this “probably means there’s a human error behind such an event, and they’re not very happy to admit that.” Despite his earlier claims of full cooperation by China, he also noted that “China doesn’t allow for those sorts of things to be said out loud.” The Washington Post recently asked Embarek about the differences in his statements, to which he said that his quotes were misinterpreted. However, his words remain.

Watch the full episode for more information uncovering the truth on this crucial topic.

Truth Over News premiers every Tuesday at 5 p.m.—exclusive on EpochTV.

Emily Allison
Emily is a writer for The Epoch Times and a freelance political journalist. With an extensive background in Political Communication and Journalism, she is committed to serving her country by bringing the truth about important issues of the day to the American people.
https://www.theepochtimes.com/epoch-tv-review-china-pressured-who-investigators-to-cover-up-lab-leak-theory_3961697.html