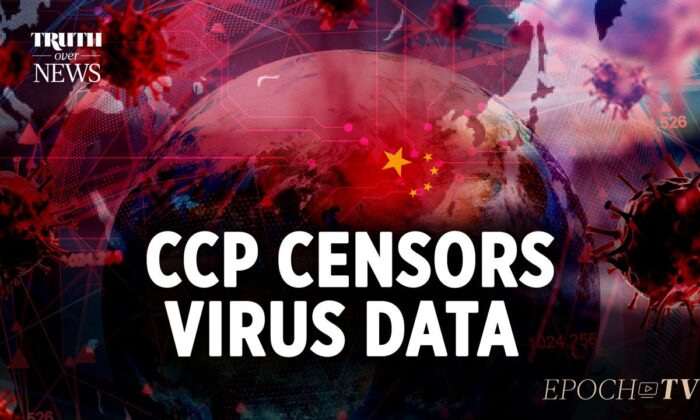 Join Jeff Carlson and Hans Mahncke in the latest episode of “Truth Over News” as they reveal the latest details surrounding Peter Daszak’s violation of NIH grant requirements and his admission that information regarding the experiments conducted at the Wuhan Institute of Virology are currently subject to censorship by the Communist Party of China.

The National Institutes of Health recently gave EcoHealth Alliance five days to submit any and all unpublished data from its experiments at the Wuhan lab. Peter Daszak, President of the EcoHealth Alliance, a nonprofit non-governmental organization that supports various programs on global health and pandemic prevention, failed to submit the required material. In a letter to the NIH, Daszak revealed concerning information regarding the quality and integrity of these experiments that may explain why this information was not submitted to begin with.

On Oct. 20, the NIH admitted to Congress that they had funded dangerous gain-of-function experiments conducted by Peter Daszak’s EcoHealth Alliance and the Wuhan Institute of Virology. The NIH also sent EcoHealth a letter giving it five days to provide missing data that was required under the NIH grant. Instead of directly complying with their request, Peter Daszak sent a response to the NIH. He again failed to provide the data, which included a fifth year progress report that was required under the terms and conditions of the NIH grant. This missing report was only discovered due to a lawsuit against the NIH for documents related to EcoHealth. If not for this lawsuit, the unsubmitted progress report would likely remain undetected.

In his letter to the NIH, Daszak claimed the NIH had not pursued EcoHealth for the missing data, among a host of other excuses. He said they had uploaded the report, but the system did not allow them to officially submit it. He also said that the NIH never sent a request for the fifth year report. Daszak however failed to mention whether or not he or other members ever raised the issue to anyone in the NIH. Rather, he continued to point the finger at the NIH for not pursuing EcoHealth when it was his organization that did not submit the required report under their grant agreement.

In his letter, Daszak also revealed a progress report that extended beyond the period covered by the missing report. Daszak noted that the NIH had only required that EcoHealth stop funding work at the Wuhan Institute in April 2020, after President Trump terminated their grant. However, even when the funding was no longer available, Daszak said EcoHealth continued reporting its work, saying “even though the grant was terminated and then suspended, and funding is not available to us to work on this, we have continued to comply with NIH reporting requests, and submitted reporting for years six and seven of this grant.” What types of experiments, if any, were done during this period? As far as the hosts know, these year six and seven reports are not currently made public.

Under the original NIH grant, EcoHealth was supposed to immediately stop any experiments that showed evidence of enhanced virus growth greater than 10 times. However, EcoHealth’s 2018 annual progress report described an experiment that exceeded NIH reporting thresholds. In these experiments, the Wuhan Institute of Virology had created a novel coronavirus with a 10,000 times higher viral load. This should have created a cessation of experiments and a review by the NIH. Instead, those experiments continued, even during the time when the fifth year progress report had failed to be submitted. Daszak defends his failure to report on these experiments by claiming that he was not under any duty to stop or report the experiments as the viral load data was based on genome copies per gram, not viral titer.

However, the viral load was over 10,000 times greater when it should have remained under 10, making it far more pathogenic than the reporting requirements set forth in the NIH grant. Daszak argued that their work should have been ignored, noting that “given the small number of mice, it is also uncertain whether the survival and weight loss data were statistically relevant.” Professor Richard Ebright of Rutgers University, a long time critic of gain-of-function experiments, responded to Daszak’s reasoning in a tweet, saying “EcoHealth has reached a point of such desperation that it now points to the slipshod character of its research, and the limited predictive value of its research, as defense.”

Daszak also claimed several times that he couldn’t hand over the genetic sequence data to the NIH because that information is currently going through an approval process by Chinese Communist Party (CCP) authorities. In other words, U.S. taxpayers, through the use of a government federal agency, gave Daszak millions of dollars in grant money to conduct advanced gain-of-function experiments, only for the results of those experiments to be withheld and censored under the control of the CCP. This is a breach of the terms and conditions of the NIH grant, which demanded all genetic sequence data be made available, regardless of CCP involvement. The fact that this data remains under the control of the CCP discredits the NIH and Daszak’s claim that their Wuhan experiments could not have caused the pandemic. It is not knowable what viruses were studied because the data has not been released and because it is still being censored by the CCP.

What is known is that EcoHealth did not comply with the reporting requirements and the NIH did not hold them accountable. Even though the two organizations are currently engaged in a conflict of words, they are likely both fighting for the same outcome—to convince the world that they were not involved in the creation of COVID-19.

Watch the full episode for more in depth information on this important topic, and share this article so others can know the truth behind the COVID-19 pandemic.

“Truth Over News” premiers every Tues and Thurs at 5 p.m.—exclusive on EpochTV.

Emily Allison is a writer for The Epoch Times and a freelance political journalist. With an extensive background in Political Communication and Journalism, she is committed to serving her country by bringing the truth about important issues of the day to the American people.