Former Centers for Disease Control (CDC) Director Robert Redfield explained why he thinks the CCP virus came from a Chinese lab (the Wuhan Institute of Virology or WIV), echoing support for the theory that was dismissed by media and politicians as having no scientific merit and not worth investigating.

The former CDC director sat down with Dr. Marc Siegel, a professor at NYU and Fox News contributor, to discuss the pandemic’s origins.

The director of the National Institute of Allergy and Infectious Diseases (NIAID) and the government’s voice of scientific authority on the pandemic before and during the pandemic, Dr. Anthony Fauci, has long argued that the virus came from an animal market in Wuhan China and not a lab leak.

Until last month, the infectious disease expert had maintained that COVID-19 had developed naturally. Fauci told National Geographic in May 2020 that there’s no scientific evidence that the CCP (Chinese Communist Party) virus was made in a lab.

“Everything about the stepwise evolution over time strongly indicates that [this virus] evolved in nature and then jumped species,” Fauci told the publication at the time.

“The statement from last year was completely false,” Adm. Brett Giroir, former Department of Health and Human Services (HHS) assistant secretary, told Fox News. “There was no pattern of mutations that suggest that it went right from an animal in a natural situation to humans—and there’s still no evidence to show that. So that statement was completely wrong.”

Redfield argued that the COVID-19 virus has a much faster rate of transmission than other lethal coronaviruses such as SARS and MERS which have been found to spread through animals and at a much slower rate.

“There’s an alternative hypothesis that it went from a bat virus, got into a laboratory where in the laboratory, it was taught—educated, it evolved—so that it became a virus that could efficiently transmit human to human,” Redfield said.

“And my professional opinion, as a virologist, is … that’s the hypothesis that I support. You know, other individuals—Tony Fauci, for example—would say that he prefers to support it evolved from nature. I think those are the two hypotheses.”

Early reports about an outbreak of the CCP virus first appeared in Wuhan in late 2019, when a cluster of cases was reported by state-controlled media to be linked to a local wet market. More than a year later, the origins of the virus remain unconfirmed, although the theory that the virus leaked from a laboratory at China’s Wuhan Institute of Virology is gaining traction. 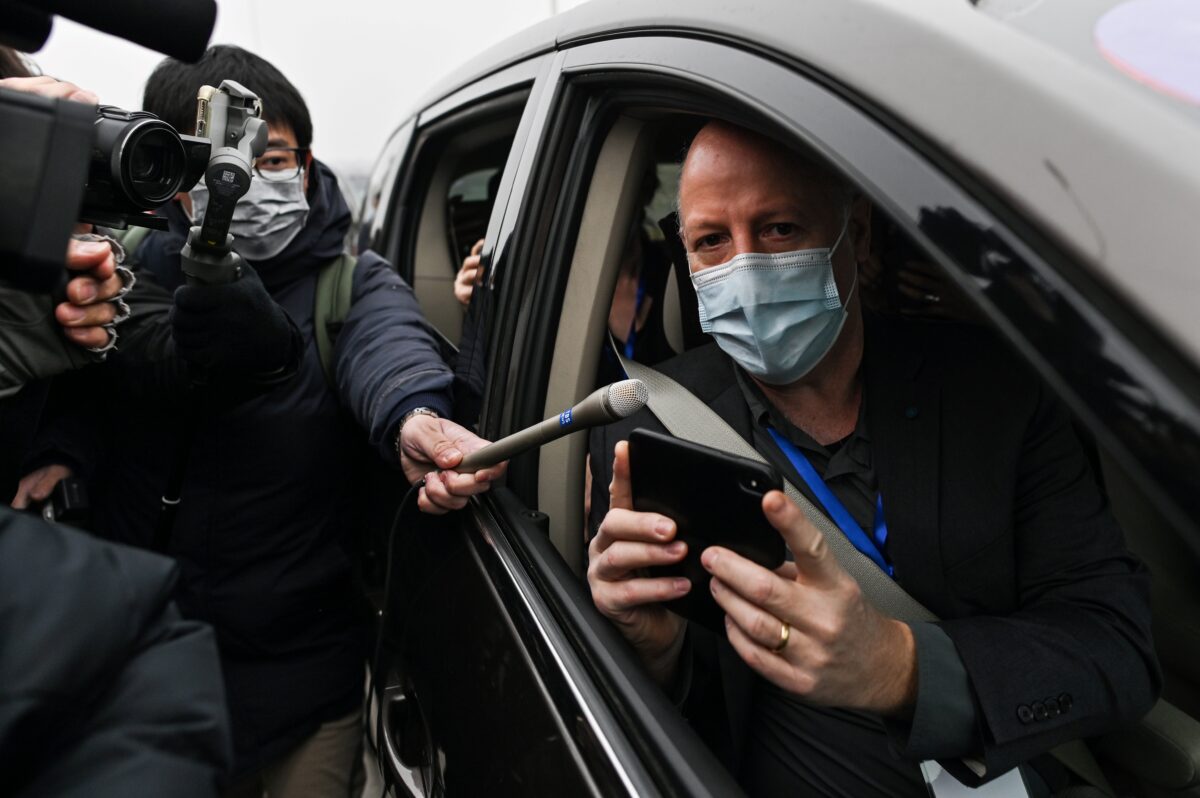 Peter Daszak, a member of the World Health
Organization team investigating the origins of
COVID-19, speaks to media upon arriving at the Wuhan
Institute of Virology in Wuhan in China’s central Hubei
province on Feb. 3, 2021. (Hector Retamal/AFP via
Getty Images)

The lab-leak theory, which until recently had been dismissed by most mainstream media outlets and fact-checkers as a “debunked conspiracy,” gained significant traction after The Wall Street Journal reported on May 23 that three researchers at the WIV were hospitalized in November 2019 with symptoms consistent with seasonal flu and COVID-19. The newspaper cited unnamed U.S. government sources familiar with a previously undisclosed U.S. intelligence report.

Redfield, a virologist, expressed disappointment in what he described as a “lack of openness” within scientific circles “to pursue both hypotheses.”

“I’m just giving my best opinion as a virologist, and I don’t think it’s plausible that this virus went from a bat to an animal—we still don’t know that animal—and then went into humans and immediately had learned how to be human-to-human transmissible to the point of now causing one of the greatest pandemics we’ve had in the history of the world,” Redfield said.

President Joe Biden in May ordered the U.S. Intelligence Community to ramp up efforts to investigate the virus’s origins and produce a report in 90 days.

Chinese scientists and officials have consistently rejected the lab-leak hypothesis, claiming the virus could have circulated in other regions before it hit Wuhan and might have even entered China through imported frozen food shipments or wildlife trading.

The World Health Organization (WHO) published a report about its investigation “to identify the zoonotic source of the virus and the route of introduction to the human population, including the possible role of intermediate hosts, including through efforts such as scientific and collaborative field missions.”

WHO Director-General Dr. Tedros Adhanom Ghebreyesus said the findings of the probe were inconclusive and called for further investigations.

Redfield expressed concern that the WHO was “highly compromised” by the CCP.

“Clearly, they were incapable of compelling China to adhere to the treaty agreements that they have on global health, because they didn’t do that. Clearly, they allowed China to define the group of scientists that could come and investigate,” Redfield said. “That’s not consistent with their role.”

Isabel van Brugen and Jack Phillips contributed to this report.